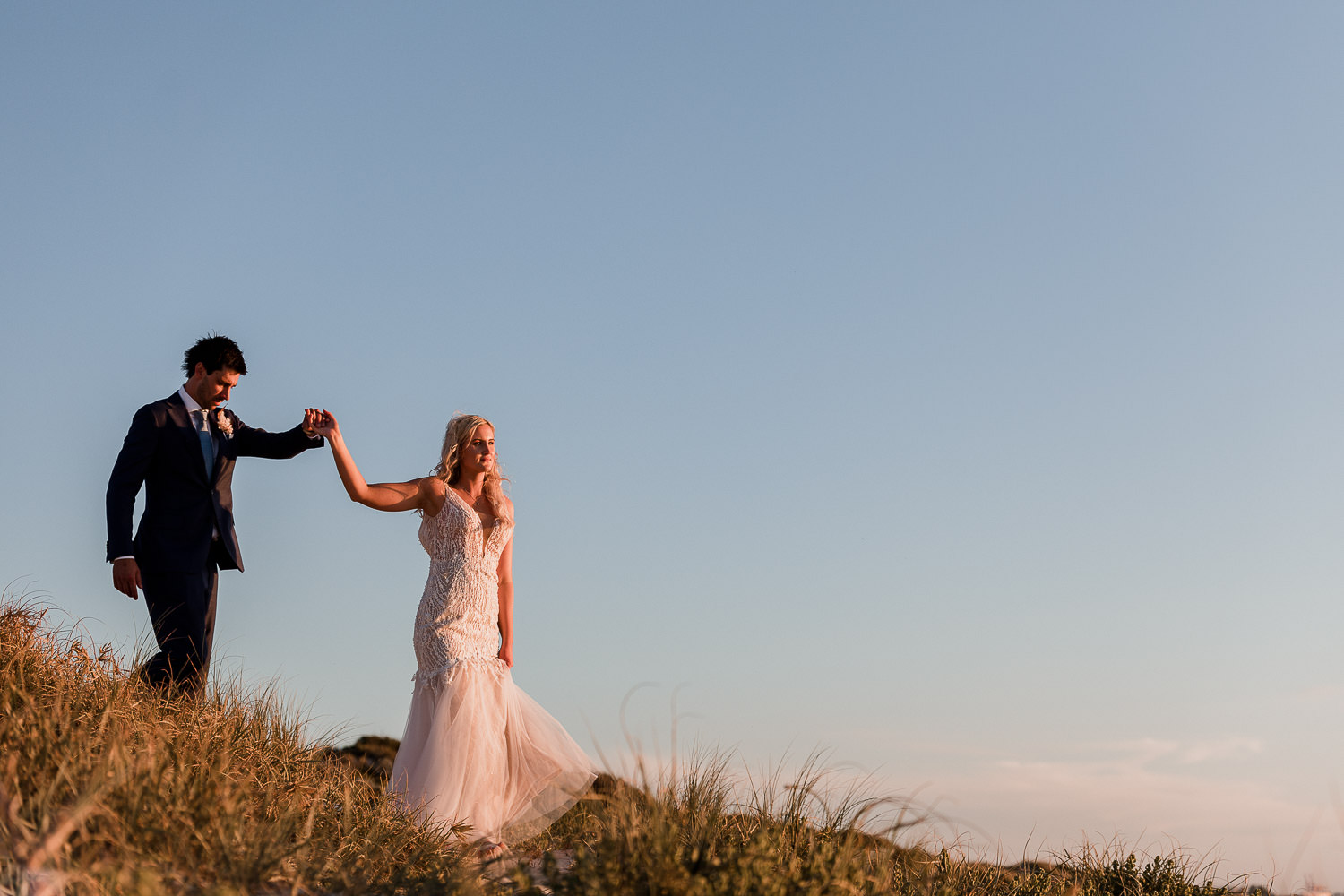 Coastal Glamour for Anelyce and Geoffrey

All the fun started early on the day of Anelyce and Geoffrey’s wedding, with the bridal party getting ready in a Scarborough Beach seaside apartment and the boys over at the groom’s parents’ house in City Beach.

November 6, 2020 was the special occasion held nearby at Cottesloe Civic Centre – so it was definitely a coastline-shoreside theme for the happy couple just with the locations alone!

Anelyce is the little sister of Geoffrey’s school mate, and together they clicked…finding each other as soul mates and deciding to spend the rest of their days together.

When I got to the seaside apartment in Scarborough, the celebrations were well and truly underway already as the bride, her bridesmaids and her family got themselves organised – but not without a couple bottles of sparkling wine, of course!

It was laughs all around as everyone counted down the hours and the minutes, but then it was finally time for Anelyce to put on her gown and don the accessories. Her stunning Jessica Bridal Couture gown glistened on her, and Anelyce smiled ever so brightly as she walked into the lounge to show her loved ones – the ladies gasping, her dad beaming with pride as she pinned his boutonniere to his suit jacket.

With the flowergirls ready, bridesmaids dressed, all hair and makeup finished, it was time for the finishing touches to Anelyce’s wardrobe – shoes and veil. And as quickly as those were placed in their proper spots, we moved on to portraits, mostly done outdoors in the unique hallway space just outside the apartment – the backdrop colours and circular angles absolutely suited this photoshoot.

My associate photographer was sent to take photos of the groom’s preparations over at City Beach, and the same light-hearted, fun and exciting atmosphere welcomed him when he walked through the door. All waiting for the photographer to come along, the groomsmen finally got the chance to get themselves ready properly and had a blast making sure shoes were shined and cufflinks were in place – there was some great hilarity involved in the morning there, but we also managed to get a collection of wonderful portrait shots that could have easily mistaken the guys for participating in an Abercrombie and Fitch ad campaign!

The ceremony was held at Cottesloe Civic Centre on the main lawn area, a grandeur outdoor venue that can make anyone feel like they are on the grounds of a castle. And whilst the groom and his party arrived well ahead of schedule, this gave my associate photographer and I enough time to walk through the space and take photos of guests arriving and mingling with each other.

Before we knew it, Anelyce had made her arrival, holding on to her amazing preserved dried flowers as her bouquet, her dad by her side, and the bridesmaids making sure she was ready to walk down the au-naturale aisle.

With the sun beautifully positioned and not a cloud in the sky, I did have to position myself to avoid as much shadowing as possible – which wasn’t too much of a concern given the ceremony was outdoors and I had a lot of freedom to move around. With the nuptials underway, the angle to get photos of the ceremony itself is fantastic at the Cottesloe Civic Centre because of the height of the staircase where the bride and groom stand – definitely a unique positioning you don’t see much else around Perth.

Vows recited, rings exchanged and the first kiss of marriage declared, Anelyce and Geoffrey greeted their loved ones as husband and wife who were all a flutter with their love for one another.

Once all congratulations were noted, it was time to head out for bridal photos, done around the Cottesloe Civic Centre’s Secret Garden and then around City Beach.

The tranquil atmosphere at the Secret Garden was a great way for the whole bridal party to unwind and relax after the ceremony. The lush manicured gardens combined with the elegance and charm of the boundary pillar columns and panoramic ocean views made for a beautiful location, and I made sure we got the best of every angle there was to offer.

After exhausting all the amazing spots the Secret Garden had, it was off to City Beach for more bridal shoot photographs where we headed straight for an amazing gazebo, gorgeous pathway, and the infamous City Beach stairs right on the beach. What was great about the photoshoot with Anelyce and Geoffrey is that they were so willing to have their pictures taken almost anywhere and everywhere, which in return led them to get a range of options for their wedding album.

Following intimate moments on the beach for the couple to have some quiet time during sunset (what is called ‘the golden hour’), we all made our way to Hamptons City Beach for the reception.

A restaurant and function centre known for its sophistication and relaxed surrounds, Hamptons City Beach provided an exquisite venue for Anelyce and Geoffrey, which certainly impressed their bridal party and their guests – in particular, it wasn’t just the décor but the phenomenal view of the Indian Ocean!

With the guests settling in, and the groomsmen and bridesmaids arriving, it was time for the newlyweds to make their entrance, and boy did they make an amazing entrance wowing everyone to a round of applause.

Before we knew it, it was time for emotional and heartfelt speeches, fantastic conversations, great food and drinks, the cake cutting and a boogey on the dance floor! But not without the bridal waltz and the father-daughter dance first up!

To end the night before I left, I encouraged Anelyce and Geoffrey to take a couple moments to head outside for a few more shots at the front of the City Beach Stairs…the night sky and the stairs’ lighting truly set the scene for a romantic photographic opportunity.

To Anelyce and Geoffrey, I wish you both all the happiness in the world that marriage has to offer, and I thank you for allowing me to be your wedding photographer; to trusting me with capturing the memories you’ll be sharing with family, friends and all loved ones. All the best for both your futures.