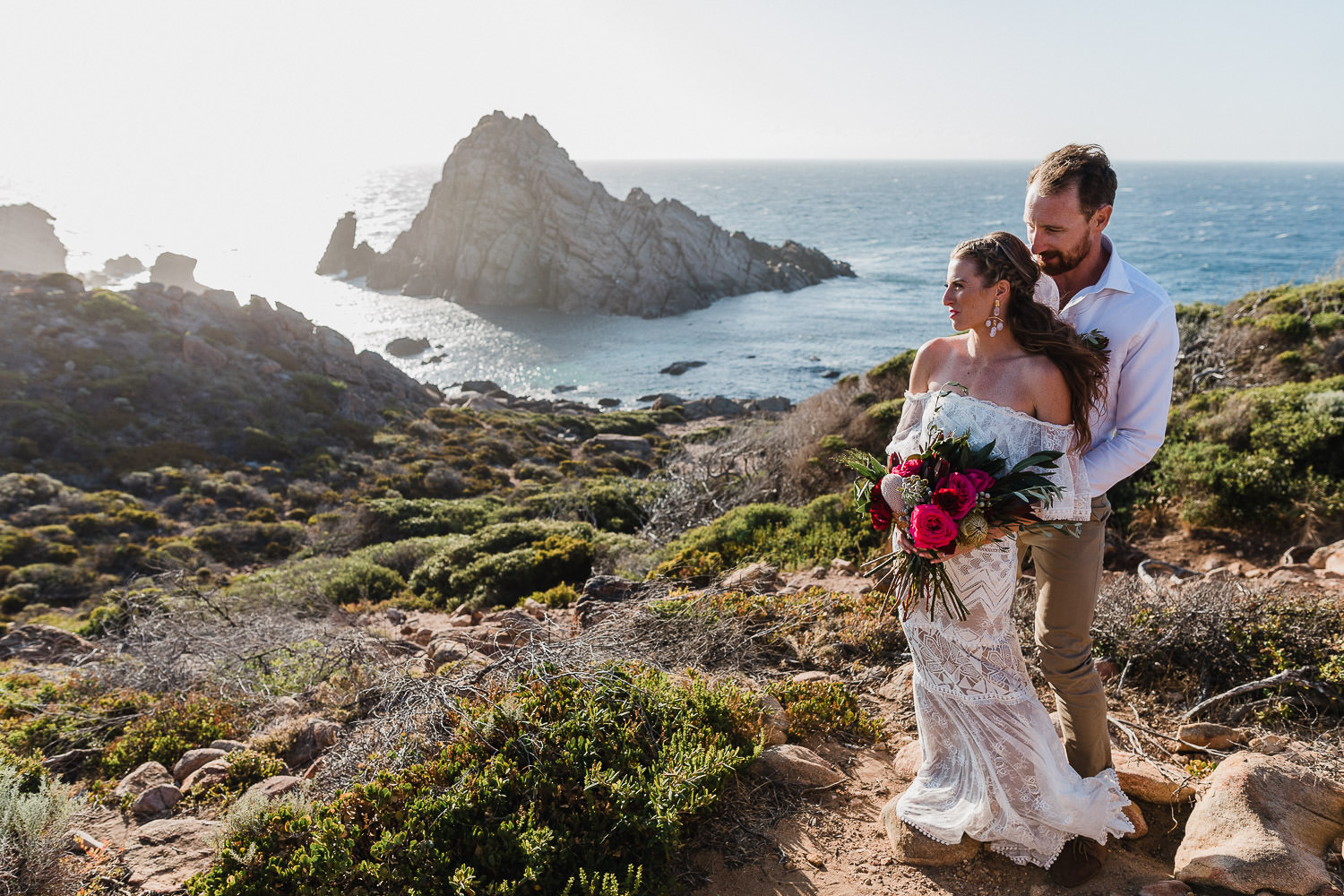 It was a showstopping intimate and romantic wedding for Kate and Brody, who brought together their closest friends and family in late February on the picturesque South West, WA coastline. The bride and groom had chosen to spend their special day in Bunker Bay near Dunsborough, 250kms south of Perth, where the bright clear skies and crystal blue water truly put on a show for them.

Kate and Brody were neighbours for a long time, and so it was destined to be – that they spend the rest of their lives together. Both with a love of the outdoors, Dunsborough was the perfect location for the couple’s wedding – even though they travelled all the way from Onslow!

With their 18-month-old daughter by her side every step of the way, Kate spent the morning getting ready at the Luxury Pullman Resort in Bunker Bay, an award winning world class hotel in the South West wine region. Her two sisters were also there, the bridal party thoroughly enjoying preparations with glasses of champagne and the stunning scenery of the Dunsborough backdrop.

With make-up and hair ready, Kate was stunning in her lace gown, and her bouquet of red roses amongst natural Australian foliage really made an impact in the photos. And it was certainly a family affair as last minute touches were made before group pictures were taken.

In the mean time, the groom and his groomsmen decided not to partake in pre-wedding photos – instead, opting to go for a refreshing swim in the South West’s ocean. But that didn’t stop me from making sure the bride was happy! So I took some sneaky shots for her of the boys having a dip at a private Bunker Bay beach and chilling out before the nuptials.

The ceremony was due to begin on the white sands of that exact beach, and guests began to slowly appear as the weather just continued to get better. Bare feet everywhere and the sun shining, the intimate affair felt private and personal as Brody waited for his bride to come down the boardwalk, through the bush and dunes. She walked towards him finally, to the tune of ‘Georgia’ by Vance Joy – to honour the couple’s daughter who bears the same name.

The backdrop for Kate and Brody was exquisite, one of the most perfect days to have a wedding – I don’t think I could have been any happier for the lighting and colours that complimented the bride and groom. And I could see how happy everyone was, cheering for them as they signed their papers and walked back up the aisle together as husband and wife.

These types of locations, like the South West private beach, are a dream for a photographer like me; there is so much room to move around, get all sorts of different angles, work with light from various spots, and shoot from all over the location of not only the bridal party but of guests too.

So many delightful moments were captured through the lens here.

Bridal photos were taken at the resort and then we took a five minute drive to Sugarloaf Rock for some epic images with Western Australia’s stunning nature offerings in the background. The sun was giving me the perfect light to work with, and Sugarloaf Rock was the most ideal spot for Kate and Brody. Some of my favourites in this collection of photos are the candid shots of Kate walking in the lead.

The newlyweds’ afterparty was a cocktail affair at the resort – a reception style that is becoming more and more popular amongst weddings, I have noticed. This was a great opportunity for me to just walk around, with the ocean and pool in the background, and snap away at as many guests as I could. I noticed Kate and Brody really had a wonderful group of friends and family around them, and a great time was had by all.

The sky in the WA South West was stunning as the sunset, the darkness rolling in softly as speeches began. It was a magnificent evening for Kate and Brody, and I too got many laughs from mingling with guests. I wish the couple a very bright future together filled with love, joy and all the happiness in the world.

The Best of Year 2019 – Perth and South West Weddings