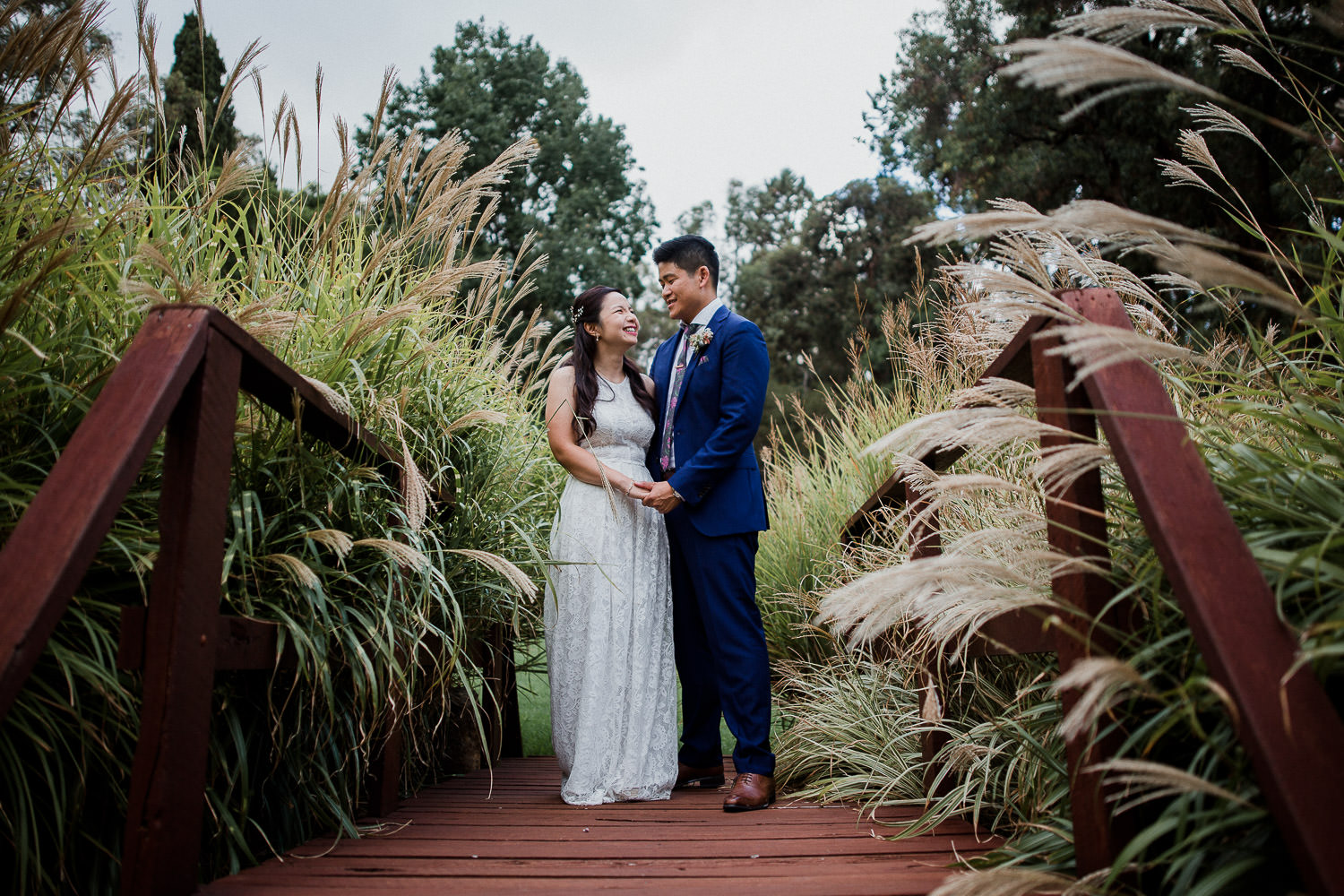 To witness two cultures merging officially as one is definitely a sight to see, as I was witness to one for the Perth Hills wedding of Reimen and Tim on March 15, 2020.

Although the couple’s wedding day was modern and western, there were still significant Chinese traditions that were followed, including use of the colour red and of course a stunningly encapsulating Chinese tea ceremony beforehand.

Rei and Tim indeed had luck on their side for their special day on March 15 – it was the last day weddings in Western Australia could go ahead before the government introduced tough restrictions for the Covid-19 pandemic. Timing really worked in their favour, as Rei and Tim had travelled from Karratha to Perth for the celebrations, and the bride’s family had arrived from overseas just before Australian borders closed to tourists and the 14-day quarantine rule was enforced.

With both Rei and Tim being of Chinese heritage, we began the day with a traditional Chinese tea ceremony out in the beautiful Perth Hills region to the east of Perth at a local AirBnB within Pickering Brook. For those unfamiliar, the tea ceremony is a common tradition in weddings when the bride and groom pay their respects and show their gratitude towards the parents, new in-laws and elders by serving them tea. In return, their families give their blessings to the newlyweds by gifting them red envelopes with money inside.

My lens and I loved the backdrop of all the intense red decorations, red being  considered one of the luckiest colours in traditional Chinese culture. And as I took photos of all the guests arriving for the tea ceremony, the bride finally revealed herself in a traditional Chinese gown and the morning began on a wonderful note of family togetherness, custom and joy.

Following the events of the tea ceremony, it was time for the bride and groom to get themselves ready for their modern wedding. With the bride’s make-up and hair in place, the groom’s shoes polished and tie ironed, we were soon ready to take photos on the balcony of the guest house, where the backdrop of the Perth Hills really came alive and complemented Rei’s all natural flora bouquet.

It truly set the scene for the day ahead, as both Rei and Tim are nature lovers and thoroughly relish in the great outdoors.

Araluen Botanic Park was the delightful scene for the happy couple’s ceremony, an extraordinary garden nestled in a true Australian bush setting in the Perth Hills of Roleystone, just 37 kilometres south east of Perth city.

A photographer loves an overcast day, and the day was exactly that – clouds took the hard edges off the midday sun so all the light I was utilising really flattered the angles and shots of all guests and of course the bridal party. I love days like this, where I can use the clouds to naturally diffuse light and I don’t have to stress about shadows; it also made all the greenery in the background pop with intense natural colour.

Rei looked absolutely stunning in her lace gown as she walked down the red carpet with her family right alongside her. An intimate affair, the guest list was small and it truly brought to effect how tight knit Rei and Tim’s circle of friends and family were. The couple declared their vows, exchanged rings, and then nothing but happiness showered over them as they were officially announced husband and wife.

The gardens at Araluen Botanic Park in the Perth Hills are one of my favourite locations for photography, especially when it comes to weddings. There is so much around to complement bridal parties, and Rei and Tim certainly took advantage of the gardens to have beautiful photos that would last a lifetime within their family.

They were also incredibly natural in front of the lens, and we all had a wonderful time walking around the park for varying shots. To be honest, we could have been there all day! But alas, we eventually had to wrap things up after getting the newlyweds to climb down below one of quaint, wooden bridges for what was definitely an impressive backdrop.

Their Perth Hills reception was held at a large tent on a wooden deck also at Araluen Botanic Park with all guests awaiting for the arrival of the bride and groom. As soon as they came in to view and greeted their guests, I could see Rei and Tim really relax even more as they mingled and began to ‘let their hair down’ a bit.

Speeches soon kicked off formalities of the evening, and it was a glorious mix of happy tears and joyous laughter. And while the dance floor started to fill itself up as the rain sprinkled down, it was a great opportunity for me to just wander through the crowd and take photos of everyone and anyone – always a great reminder for the newlyweds to look back on and see how much their happiness together has made those around them happy too.

I wish Rei and Tim all the happiness in the world for their long lives together; it was a complete pleasure photographing their special day and being a part of creating a lifetime of memories.