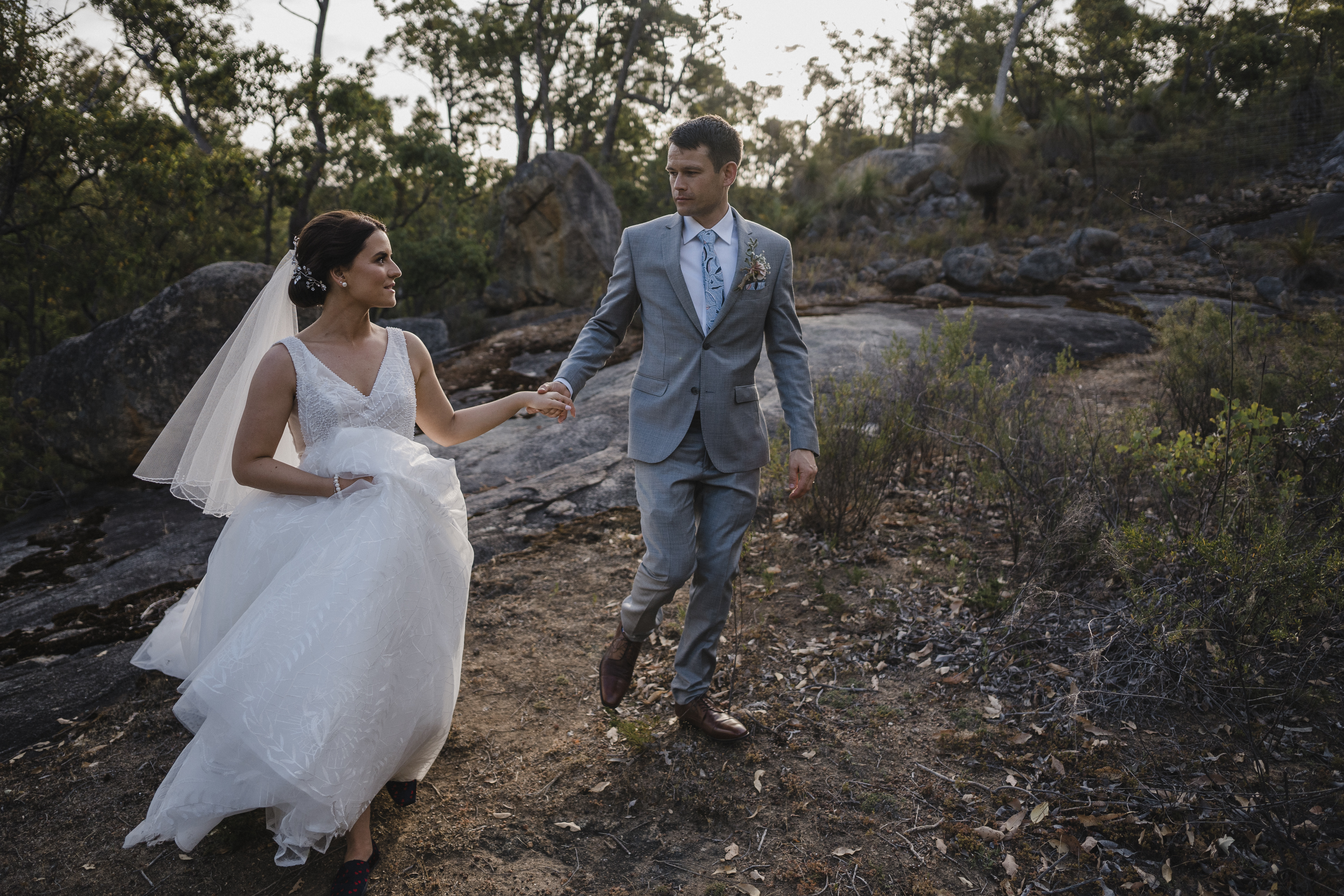 Escaping to the great outdoors for Caitlin and James’ wedding

A wedding at Darlington Estate Winery doesn’t get any better, but Caitlin and James certainly had a most exquisite celebration at the location, which is about 30-kilometres east of Perth in the hills.

And whilst the couple is both nature lovers, it was a most fitting backdrop as Mother Earth truly put it on for them – with the best of the bush for their ceremony and celebrations.

With most of the week fairly hot, 7 December 2019 claimed an unusually cool summer day with some rainfall but it made for fantastic lighting and even more deep, rich greens and browns on all the flora.

From the beginning, I knew this would be a classic, Australian-style wedding and I was enthralled by the bridal party as everyone got ready at Caitlin’s parents’ house; Caitlin the last to put on her intricately web-patterned wedding gown, depicting her love for the outdoors, as her bridesmaids donned sky blue dresses that were bound to stand out from the bush landscape.

There was an abundance of laughter as the women helped Caitlin get dressed and put the finishing touches on her. Throughout the morning, I made sure to capture images of Caitlin on the staircase; she had said to me there was much meaning to her when it came to those stairs. The family had always taken photos on them for special occasions such as school balls and graduations, so it was inevitable that I include those pictures.

What made it even more special was the ability to hang the dress on the banister in perfect light.

Everything was just so natural with Caitlin, her bridal party and her family, it was truly enjoyable working with them all. Outside, the blue of the women’s dresses and the white of Caitlin’s gown complemented the background of the car that was ready and waiting for them – the day was working out perfectly, everything was coming together in terms of atmosphere, colours, lighting, angles, and more.

Whilst the champagne flowed and the laughter grew with Caitlin and her bridal party, groom James got himself ready at a local Air BnB in the Perth hills. He too incorporated the bush element into his style, with his tie depicting the great outdoors in soft grey-blue tones.

Slightly opposite to Caitlin’s classic car, the groom and his groomsmen headed to the ceremony in a kombi van, all feeling relaxed with a hint of nervousness – as is normal!

As James and his party anxiously awaited the arrival of the bride, they mingled and said hello to all their guests, making sure everyone settled in comfortably. Thankfully, the drizzling light rain had stopped just before Caitlin arrived, and photographing the long walk from the car to where her husband-to-be was waiting was incredibly fun for me – the patio and steps with earth-coloured carpet was a stunning and personal touch for their entrance, and what I loved about the technical side of things was that I had plenty of room to run circles for every angle.

There was so much love in the house (let’s change that to, so much love in the great outdoors!) as Caitlin and James declared their vows in front of an intimate crowd. They also delighted everyone, and each other, by preserving a letter to one another and placing it into a wine box as a time capsule; the aim being to open it up, drink the wine and read the letters on their fifth anniversary.

Can it get any more romantic than that?!

Working outside, together with the newlyweds and all the great advantages the location of the winery provided, Caitlin and James became all the more relaxed once the formalities were over, and it was on to the family shots and then the bridal shoot.

Flat shoes on, drink in hand, Caitlin was ready to give everyone an afternoon of fun as she led the way on the grounds of Darlington Estate Winery – and I have to say, repeating from earlier, that the blue colour Caitlin chose for her flowers and bridesmaids’ dresses really sat perfectly with the natural backdrop of the bush.

I finally got Caitlin and James alone together for some more intimate photographs in the bush as well as the vineyard, and again, everything simply fell into place, including their relaxed attitudes and endearing feelings for one another.

It was a fairly casual setting at the reception, which was also held at Darlington Estate Winery – great for everyone; no one had to travel to two different locations. Traditional met with modern for the party scene, where guests got greeted with a choose-your-own-donut table, Ferrero Rocher chocolates, and the most unique of all – a cheese wedding cake.

Yes! That’s right, the wedding cake was made out of four tiers of different cheeses! And capturing the essence of the happy couple’s reception decorating, the bush theme flowed perfectly and really gave in to the personalities of both bride and groom.

I love taking photos of the reception; it’s where nothing is staged, I can intrude and capture people’s moments together with genuine smiles, laughter and conversation, and it’s where most of the bridal party relax even more.

With the cutting of the cake, speeches and some mingling between guests, Caitlin then presented James with a surprise – a wedding card signed by all the Perth Glory players.

It got James teary, to say the least, and the newlyweds then continued on for their first dance together, where there was not a dry eye watching, followed by a night of fun-filled music and entertainment.

Photographing Caitlin and James’ special day was a memorable one; they were an easy couple to work with, and their venue provided me with so many options for images. And I wish them all the best for their lives ahead.