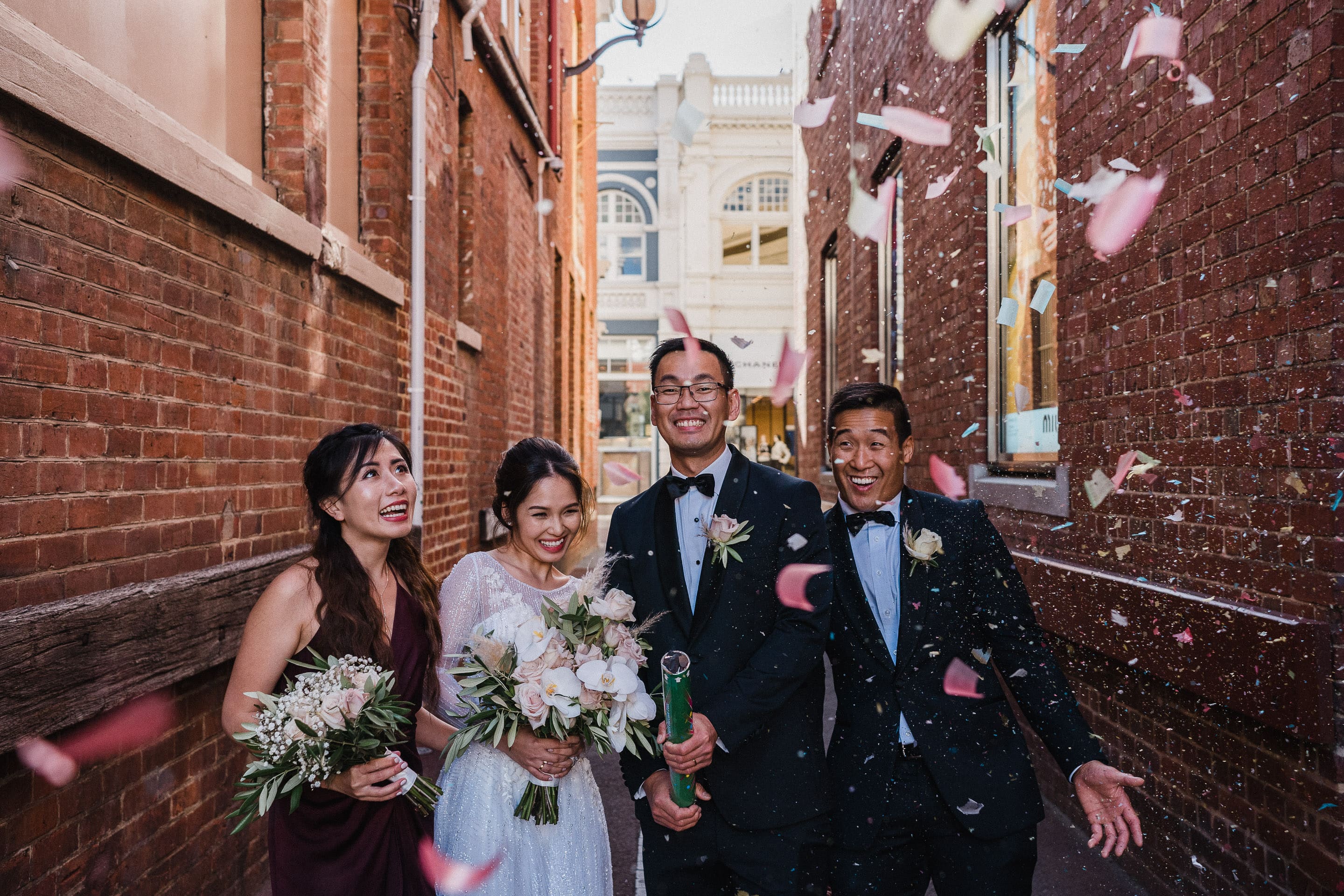 I had the greatest pleasure earlier in the year to shoot engagement photos with newly engaged couple Mimi and Philip, a most delightful couple who love the great outdoors and life by the seaside. It was only fitting that they had engagement pictures depicting their personalities, and so it was chosen to have photos done in a pine forest north of the Swan River, and at Iluka Beach.

I was thrilled when they asked for me to also shoot their wedding day, and what was even more beneficial for both Mimi and Philip, and myself, was that the engagement shoot allowed us to get a feel for each other – which made it all easier come their big day.

By this stage, they knew my processes, and were already comfortable in front of the camera so when I appeared at their pre-wedding location the three of us knew what to expect in terms of how I worked, and what sorts of images they were keen to get.

But Mimi and Philip took a slightly different approach to the start of their day, deciding to both get ready at their home in Morley but in separate areas of the house. There was still plenty of room for Mimi, her bridesmaid and family members to all get ready whilst the boys set up elsewhere – this also worked in my favour, as I didn’t have to drive to two different locations!

And because they weren’t far away from each, the bridal couple took an opportunity to utilise a ‘first look’ photo session, a new on-trend inclusion in wedding photography where the bride and groom meet up for a quiet moment, dressed in their wedding attire, before heading off for the ceremony.

So as Mimi took her place by the bay window, gazing out towards the light and being a vision of perfection, Philip approached her – the both of them delighted in each other’s arms and ready to head off to declare their long term commitment to one another and to their guests.

Yet before the trip could be made, an important tradition was played out in front of Philip’s parents as they gifted the bridal couple each with a red envelope, the colour symbolising good luck and, in effect, warding off evil spirits.

After the formalities of family photos, the bridal party made its way to the newly refurbished Old Tower House, Perth Marriage Registry Office for a relatively low-key ceremony with minimal procedure. And always a laugh, groomsman John knew how to lighten the atmosphere with his quirky, funny attitude towards life, and he continuously brightened everyone’s day, sending the nerves packing.

John is just one of those guys everyone wants to have as a groomsman!

It was easy to see that Mimi and Philip enjoyed every minute of the ceremony, and as their photographer, I could see it suited them perfectly. A decent guest list saw the room filled to the brim, and when we went outside into the glorious sunshine, we got a great photo of everyone who attended, under a stunning tree.

Whilst I took photos of the newlyweds with their parents, it was beautiful to see they had worn red corsages – the same as the red envelopes that were handed to Mimi and Philip earlier in the day. They really stood out, as if making a statement that they were wishing the best of luck to their children, and warding off any and all negative spirits for a bright future.

Onto bridal party photos, and we hit three locations across the city. Our first stop was Perth City, where we discovered fantastic quiet laneways and wall art that really popped out thanks to the time of day (lighting) and backdrop colours. We even managed to take some intimate photos with a stunning view of the city scape.

Our next location was Green Place Reserve, a magical hidden park in Mosman Park where yet again groomsman John had everyone laughing in barrels while he took control of the red powder flame, but then before we knew it, we had to start making our way to Bay View Park for Swan River and city scape photos before the reception, held at Tsunami Sushi in Mosman Park where guests were treated to a truly authentic fusion-style Japanese cuisine.

The restaurant really turned on the fairy lights for Mimi, Philip and all their guests and after the obligatory speeches, the newlyweds got a chance to celebrate their newfound marriage alongside their loved ones during an evening of celebration.